You can go around the world and find a somewhat handsome number of people who have little to no interest in sports, but the same can’t be said for gaming. A survey in 2020 in the United States revealed about 50% of the country’s population play video games. I’m not a betting man, but I’m willing to bet that number has increased. Gaming is not a bad thing and is sometimes encouraged by doctors, as it has its benefits. However, like every other thing in the world, there should be limits, or else the side effects start to hamper our daily life, more on that later. Even drinking water has a limit; what to say about gambling!

The gaming industry is arguably the biggest entertainment industry. It is expected to surpass 138 billion dollars in revenue by the end of 2021, thanks to the number of gamers across the globe. Since their inception in 1947, video games have evolved massively and are a huge part of our day-to-day activities. Unfortunately, there’s a popular misconception that kids or teenagers only play these computer or video games, but a survey showed that less than 25% of gamers are under 18.

From celebrities to popular athletes down to some academia, computer games have no age limit. Considering this fact, game developers have different types of games for various age groups; even LeBron James spent his free time in the NBA bubble in Orlando gaming. The industry has been a life-changer for many people you and I don’t know -alright, I’ll admit I know some of them as gamers now earn money via streaming games on Twitch or YouTube. You could even end up winning enough money to change not just your life but also those of your offspring or family members. For example,  games like Madden NFL & Fortnite and free slots no registration offer millions of dollars in winnings.

So if you’re wondering if gaming offers so much, why should there be a limit? Let’s take a run-through of the good, the bad, and other things Computer games have to offer.

I once read an article about how playing computer games helped a young man cope with his anxiety issues. Ever since then, I have found myself tilting towards gaming whenever I feel some sort of anxiety or any other mental issues, not like there’s a proven cure for any of those problems. Gaming has always been a healthy way to relax, relieve stress, or just have fun alone or amongst friends. Aside from the relaxation benefits of gaming, it has been medically proven that playing video games improves people’s spatial and cognitive reasoning abilities.

Another unpopular benefit of gaming is the improvement of hand-eye coordination, which is known to result in better reaction times in people and an increase in:

See also  Canada: Towards an increase in the minimum reserves of banks for climate risk

A lot of people have met and become friends or pals via social media networking apps like Tinder, Twitter, or Facebook, particularly during the 2020’s COVID-19 lockdown period. Playing video games also provides a virtual community and the opportunity to meet new people and make new friends, especially for introverts or people who find it difficult to make physical connections at first sight. Of course, this community of friends might have its disadvantages due to potential online abuse or threats. Still, they are highly beneficial to many people and continue to make the world a smaller place, reducing the number of suicide by loneliness or feeling empty.

Computer games seem to have found a lot of use in the health sector in recent years. Not only does it help children diagnosed with autism communicate, but some surgeons have credited their improvement in handling technically challenging operations to playing video games. In addition, adolescents who battle with Attention Deficit Hyperactivity Disorder (ADHD) have attested that video games improve their thinking skills and attention span.

Computer Games have also been found to improve the level of gray matter in the human brain, leading to enhanced muscle control, memories, and perception. Oh, did I forget to mention playing video games teaches you to be a better problem solver, especially strategy games like Age of Empire, XCOM, and Company of Heroes? Games like Minecraft have also been known to improve the creative skills and building capacity of its players because how else would a bunch of players recreate the City of Angels (Los Angeles) in a game without good mental skills.

So far, we’ve mentioned all the benefits of gaming, even myself; I’m starting to wonder why such things would have any disadvantages or side effects but trust me when I say it does.

Gaming addiction or Internet Gaming Addiction (IGD) is a huge problem worldwide. The debate on whether to classify it as a syndrome remains an ongoing one in medical society. In the same way, playing computer games offers psychological and mental benefits, getting addicted to playing video games also offers side effects like:

Gaming addiction isn’t just defined by the number of hours spent playing video games but also by how gaming affects other aspects of your life. I know you probably think I have it under control, as all addicts say, but even the best of us have been known to struggle with the addiction to gaming.

Manchester United’s teenage sensation Mason Greenwood revealed he had to cut down on his gaming to make it into the club’s first team and focus on his professional football career. Prior to that, the 19-year-old revealed he would spend hours into the late-night playing video games, and such habits aren’t good for anyone, talk less of a young athlete at the start of his career. I have experienced situations where colleagues of mine back in the university would skip classes. I’m sure I also did it once or twice and other school-related activities because of gaming, only to end up regretting it when the rewards of such actions come to bear fruits.

Another side effect of too much gaming is physical injuries. Addicted gamers can sometimes suffer pain and inflammation to their muscles and tendons due to repetitive stress or overuse of hands and arms. These pains and inflammations, if allowed to continue, can sometimes lead to permanent injury. Gamers also develop the syndromes like “Carpal Tunnel,” an inflammation of a nerve in the wrist, which causes pain and numbness, and “Gamer’s Thumb” (de Quervain’s tenosynovitis), which occurs when the thumb is inflamed, causing it to swell and restricting the thumb’s movement. 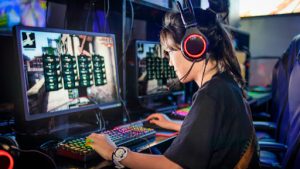 Obesity is also another problem common amongst addicted gamers. The lack of physical movement due to being seated in one position for hours and an increase in constant food intake will lead to the presence of excess fat in the body. Lack of hobbies and behavioural changes are also side effects of gaming addiction. Addicts can develop violent behaviours or lose interest in activities that include going to the gym or socializing due to the high number of constant hours spent playing video games.

We currently live in a social media era, where everyone seems to be in love with their phones, hence the increase in screen time either on the internet, social media platforms, or even time spent at work. Adding video games to this excess amount of exposure to screens and lights is another ugly problem.

Before the lockdown in 2020, a study showed the average adult in the United States spent 11 hours with their eyes focused on screens of their phones, computers, television, and playing video games. Although, scientists have always advised that just two hours should be spent -outside work- on screens. Whether this is realistic or not, it remains to be seen because it is extremely difficult to adjust your brain to only 120 minutes of fun activities after spending the majority of the day working, hence the debate over how long an adult should spend gaming.

Excess screen time due to playing computer games or even watching your favourite shows on Netflix in adults leads to insomnia and poor sleep due to light from the screens telling your brain to stay awake. It is also believed that too much of this exposure to light can trigger headaches and eye strain, not to mention the pain you feel from the neck and back as a result of sitting in one position whilst gaming.

The ugly truth is gaming fun, so much fun that all I can think about as I write this is the next quest in the Assassin’s Creed: Valhalla game installed on my computer. However, over the years, like some other people I know, I have learned to balance the activity of gaming itself. A few hours a day and not every day seems to be the remedy for me. People out there prefer to binge-play (if a word like that exists) rather than let it linger on to get back to other physical activities that include work, socializing, gym activities, and the likes. A friend of mine once told me he would rather spend a weekend playing a newly released and highly anticipated game instead of playing it for more than six hours every day for the next few weeks, which would, in turn, affect his productivity. I guess there’s no fixed solution anywhere in the world, which brings us to finding balance.

Restricting video games for kids or teenagers isn’t the easiest task in the world but it’s something that can be achieved through proper planning & supervision. But as a grown-up, there’s no one to supervise you or keep tabs on your activity. Some doctors have advised not more than three hours of gaming a day, while others suggest five-and-a-half hours of gaming in a day is more than enough, hence the never-ending debate.

The best healthy limit for any individual is to ensure that playing computer games doesn’t affect other aspects of your life. The minute it starts to, it can be classified as an addiction, which is an illness.