Owning a dog for the first time can be complicated. There are a lot of responsibilities and complications that need to be considered before actually engaging in the process of adopting a dog, and for that reason, not everyone can take care of them properly.

These responsibilities and considerations can vary greatly depending on the circumstances. Some of the factors deciding these responsibilities are the breed of the dog, its age, size, and its background. For example, if you check https://blog.petcube.com/senior-dog-care/, you’ll know how complicated it can be to take care of a senior dog.

But, as you might have guessed, owning a dog is an experience that a lot of people dream about, especially considering the whole situation with COVID-19, and it has been proven that adopting a pet is a very efficient way of fighting loneliness, which is the reason why so many people are engaging in adoptions as for now.

That is why, in this article, we will talk about what it is to own a dog for the first time, and the things you should be considered before adopting one, even more, if we are talking about adopting an American Bulldog, a dog breed that is misinterpreted all around the world to a certain extent, even when it is actually one of the most affectionate and loyal animals one can own.

First of all, before adopting any dog, regardless of its breed and age, there are some special considerations that you have to consider. Aspects related to its size, its needs, its diet, and the things you will have to buy, are some of that stuff you will have to pay attention to, but it gets more complicated than that.

You see, medium-sized to large-sized dogs tend to require more exercise and space to develop because they can get easily frustrated or stressed by small environments. When it comes to a dog’s needs, it englobes several things such as the amount of daily exercise the dog will require as well as the amount of food, grooming, and bathing it will need, so, in one way, its maintenance can greatly influence your coexistence with any dog.

Researching these things is very important because it will get you a solid idea of what you can expect from your interactions with the dog, making it easier for you to decide whether you are up to the challenge or not.

Ideally, you should research the breeds you are interested in, as you did by entering this article that focuses on American Bulldogs. Besides that, here’s a list of the most common dog supplies you will need to get for your dog in case you decide to adopt, as well as some of the questions you might want to ask yourself before adopting.

Once you have answered said questions and decided that adopting is something you want to do and can manage, let’s jump to the next section: American Bulldogs.

Getting to Know American Bulldogs 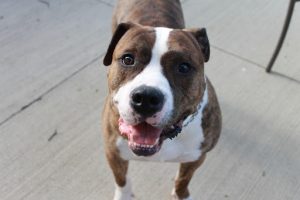 Something that a lot of people don’t understand about dogs is that their breeds can heavily influence various aspects of their personality as well as some of their needs and behavioral patterns.

American Shibas, for example, are well known for being very temperamental and patient animals who can be very proud and don’t get along with other animals that much, but are very smart and can be great companions for people who live by themselves and don’t have other pets. On the other hand, Golden Retrievers are well known for being very lovely dogs who bond easily with other animals and people, making them very good family-oriented pets.

American Bulldogs, although brave and confident, are not animals prone to conflict or hostility, and can be very protective and affectionate dogs who bond very easily in the right hands.

Although it is unlikely for them to engage in aggressive behaviors, they can stand their ground and protect their family if needed, which is the reason why they are excellent guard dogs, also because they can be trained fairly easily.

Overall, we can say that an American Bulldog is a family-oriented pet that gets along with other animals and even with children, and although they are very muscular dogs, they are very gentle with their actions.

Physical Needs of an American Bulldog

Believe it or not, American Bulldogs are the type of pets that require a considerable amount of exercise, just because they are capable of storing quite a lot of energy in their bodies. If you are someone who doesn’t enjoy going outside or engaging in physical activities that often, you might think it twice before adopting one of these dogs. If you want to know more about its exercising needs before making a decision, you should definitely check out Holistapet for more detailed information.

When it comes to its diets, the nutrition of an American Bulldog will differ greatly based on its size. Puppies older than 4 months often require around 3 cups of food daily, and when they are 6 months, you should reduce it to 2 cups. Try to split these servings into 4 rations.

Adults can eat 2 cups a day split into 2 rations, and if you can, try to add some protein to their diet because it helps them preserve their muscles and energy.

Thankfully, they don’t require as much grooming because of their short coat. Just gently brush their coat around once or twice a week and you’ll be more than fine. Only bathe them when it is absolutely necessary since they tend to have sensitive skin.