Unbelievable, but BMW’s multimedia system is already in its eighth generation. The latter was introduced by the German company as the system is expected to debut later this year on board the iX and i4 electric SUV.

IDrive 8 aims to provide a better user experience, including an improved voice recognition system, a huge touch screen and a myriad of new functions. And we’ll always find a disk to access it, good news. Using voice commands, there will be three ways to communicate with the system.

What is striking about what was presented is that the interface can be accessed through a huge curved screen. Somewhat similar to Mercedes-Benz, the multimedia system unit has a size of 14.9 inches and is one with the one that replaces the instrument cluster, which has a size of 12.3 inches.

But what will dominate the experience is the voice recognition system. The latter will introduce dialogue-based interaction with iDrive 8. The system’s AI, called BMW Intelligent Assistant, can efficiently be visualized on screens and even distinguish between the passengers who are talking to it.

Here is Shopicar! All models of the year and all current promotions.

Artificial intelligence, which the user can give a name of their choosing, can manage a variety of vehicle functions, including the air conditioning system. If you mention cold feet, for example, then the heating is activated there.

Other notable additions include increased customization options with new BMW ID functions and My Modes. The first allows users to create a profile and save various vehicle parameters, essentially replacing the existing BMW ConnectedDrive system. Ultimately, through the magic of online updates, the company claims that a BMW ID can be transferred between different vehicles. 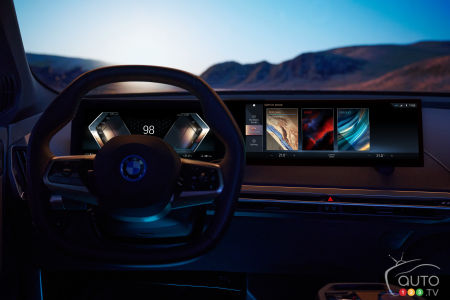 My Modes are another new feature. It is designed to replace the Driving Experience Control system of future BMW models. The first release, which will be offered with the iX and i4 models, will allow up to 10 pre-defined customizable settings. A number of modifications will be permitted, such as the color of the interior lighting, the design of the dashboard screens, or the characteristics of the driving modes, such as the steering feel and the driver’s response.

IDrive 8 will offer popular and well-known features like Apple CarPlay and Android Auto. The system will be 5G compatible. BMW says that other communication and music streaming apps will be integrated into the system. 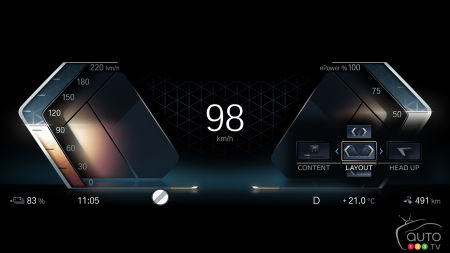 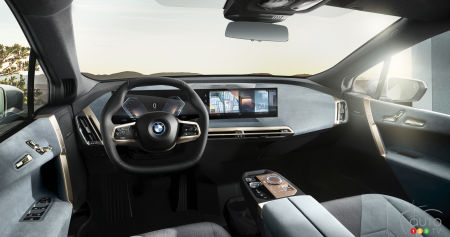 Inside the car with iDrive 8