After 14 long years, Dion Phaneuf has finally called time on his NHL career. During his time with the Calgary Flames, Toronto Maple Leafs, Ottawa Senators and most recently the Los Angeles Kings, the defenseman racked up an impressive 1,048 games.

However, he’s not actually stepped foot on the ice since 2019, when the LA Kings bought him out of his final two years of his contract making him a free agent. Sadly, there were no takers for him since, and he has sat watching from the sidelines ever since. It is probably safe to assume that many believed the former Maple Leafs captain to have already accepted retirement. But out of the blue, Phaneuf decided to announce on November 16th that he was officially retiring.

In an interview with the Toronto Sun, Phaneuf stated: “I’m proud of my career. I’m proud to be the guy who dreamt about playing in the NHL when I was skating on the outdoor rink growing up in Edmonton. You look back at everything at a time like this.I owe a lot to Brent Sutter for teaching me in junior how to be a pro. I owe a lot to some of the unbelievable teammates I had, like Jarome Iginla”.

So what better way to celebrate his retirement, than going back over some of the big moments throughout his career.

In his interview, he discussed the importance of Brent Sutter for coaching him at Junior level, but it would be Brent’s brother Daryl who would give Phaneuf his first big break. After several seasons playing for the Red Deer Rebels, where he picked up numerous accolades, Daryl would recruit Phaneuf for the Calgary Flames in the 2003 NHL Entry Draft.

After a couple of seasons with the juniors, where he would be awarded the Bill Hunter Memorial Trophy, and be named an All-Star by both the WHL and CHL, Phaneuf was called up to Calgary Flames’ first team in 2005. Daryl Stutter did try to pick him up a year earlier, but due to an NHL Lockout, Phaneuf was forced to play one more year at junior level before finally being allowed to sign his first professional contract in the NHL.

Making it to the NHL

Arriving at the Calgary Flames, Phaneuf was tipped to be one of the top rookies of the season, and he was breaking records right away. In his first season he racked up 20 goals, equaling the most in NHL history for a rookie defenceman, as well as setting a new Flames franchise record, after dethroning Gary Suter, who had only managed 18 in his first season.

He would then go on to have such an impressive follow-up season, that the Flames would end up offering Phaneuf a six-year contract extension valued at $39 million dollars, midway through the 2007-08 campaign. And he repaid the faith shown in him, by netting a career-high 60 points. However, the rapid rise to becoming one of the best defensemen in the NHL would soon come crashing down.

In the 2008-09 season, Phaneuf recorded his worst year on record. Many fans believed it was due to him not being bothered since he was awarded a big fancy contract. But the truth would later come out when he missed an important Stanley Cup playoff match with broken ribs in 2009. Because management confirmed he had been playing with injuries for much of the season, and they gave that as the reason for his poor return. Still, with his stats dropping and his high wage bill, rumours began to circulate that he would soon be up for trade. 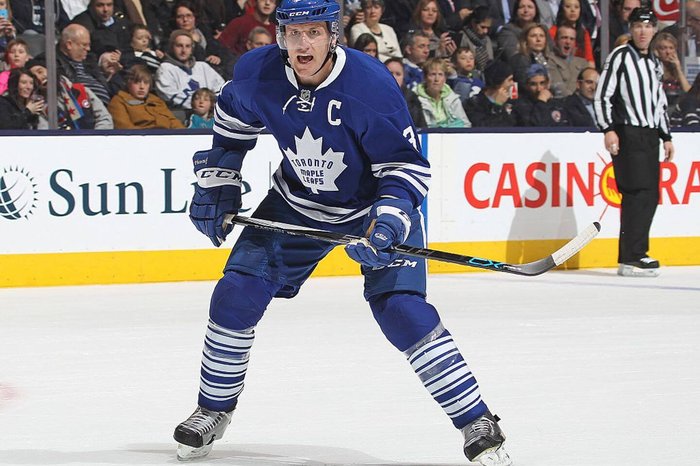 And when 2010 came around, the Toronto Maple Leafs saw him as a player who would not only improve their team, but possibly help them end a long drought without a Stanley Cup. And whilst their odds to lift some silverware did improve slightly, it never materialised in his time there. In fact, their likeliness of winning the Stanley Cup only dipped over the years the longer the drought went on.

It probably hasn’t been until the current campaign since they’ve been so highly tipped to win it. They were +1200 going into the season, sitting only behind the Colorado Avalanche (+550), Tampa Bay Lightning (+600) and the Vegas Golden Knights (+700). Now the Maple Leafs are up to +900 with all three other teams having much worse seasons than originally expected. You can bet on the Toronto Maple Leafs at William Hill if you think this could be the year they break the cure. Then again, if you’re a Leafs fan, you probably are expecting it to all fall apart at some point.

But getting back to Phaneuf, in just nine outings for the Leafs, following a horrendous season-ending injury to then captain Michael Komisarek, he temporarily became the Leafs vice-captain. Later that year in June 2010, it was announced Phaneuf would become the official 18th captain of the Toronto Maple Leafs on a permanent basis, with Ron Wilson stating that it was his mentality and behaviour in the dressing room that earned him the prestigious role.

Come 2015, with only one playoff appearance to their name, the Maple Leafs looked to offload Phaneuf after some unfair media pressure on the team, with a view to creating a new younger roster for the future. And a deal was almost done with the Detroit Red Wings, but fell through due to Toronto not wanting to foot some of his wages. So instead, he stuck around for one more season before a shock move to the Leafs’ rivals, the Ottawa Senators in 2016, a trade that saw nine players/draft picks moving between the two.

Sadly, this would begin the downward spiral of Phaneuf’s career, with his first season with the Senators being interrupted by injury. Then his second season was spent being forced to move on. There was so much disruption in the team that second season, it made the papers. Eventually, it would be enough to get Phaneuf to move, with the LA Kings coming in for him. But once again, he would just go on to have another torrid time, ending his second season there with a career-low one goal. Although it was where he made his 1,000th career appearance so he did get some game time.

He may have lacked silverware to back up his impressive career, but he certainly deserved many of the individual accolades he was awarded across his career. One of the best defenseman of the game, he will no doubt be sorely missed by many. But who knows, maybe we could see him in some other role within the NHL in the future, as a coach or even a pundit. Either way, we’re sure that Flames and Leafs’ fans alike will be reminiscing of some good times as they remember everything that Phaneuf brought to their teams.