Canada is not alone in adopting the Esports revolution, with gamers from coast to coast indulging in everything from poker tournaments to battle royale melees, as well as following those pros who stream their Esports exploits on platforms such as Twitch and YouTube Gaming.

But what makes a fully fledged Esports star? Is it their personality shining through on their stream or is it the daring moves they make in the games whose lobbies they have made their home? Well, the truth is that a little bit of both is required but here we study the latter, looking at the most daring special moves that Esports players can make which, if pulled off successfully, can launch an individual onto another level.

The move known as the “No Scope” comes mainly from games that require elite level marksmanship such as Call of Duty or Rainbow Six. Hitting a no scope shot means making a crack shot from a huge distance away, all without the help of a scope or other aiming device. Such moves are huge crowd pleasers and can have the online Esports community buzzing for days, especially if the move is captured during a live stream.

No one ever likes being bluffed during an online game, whether the dynamic exists during a board game or during a tense card game. Some of the most exciting bluffs to be found in Esports tend to happen in the game of poker, which has become an online sensation all over again in recent years. One of this game’s most potent moves is the 3-bet bluff – a complex maneuver, it is an integral part of any repertoire that a pro poker player may have at their disposal.

The drama comes once the move has been made and it is time for the viewers of an Esports stream to sit back and wonder if the star streamer’s bluff will get through or be called by their unsuspecting opponent. 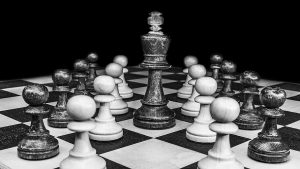 Opening moves in chess are often the most interesting, as they set up an opponent for further attacks later in the game

In the game of chess there is constant debate about what exactly is the best move of all time, but a recent survey by chess.com found that Latvian grand master Alexei Shirov’s “bishop sacrifice” was the best attacking move ever seen on a chequered board. The beauty of such a move is that no one, let alone his opponent, saw it coming, leaving a befuddled Veselin Topalov scratching his head as to how on earth he had been trapped in check mate. No bishops were hurt in the making of this move!

League of Legends has been one of the longest running Esports and part of its appeal is that victory can be snatched from the jaws of defeat with genuine skill and talent required to get the job done.

Hong “MadLife” Min-gi is a legend of the game, known for his incredible hook maneuvers which could swing a game in his team’s favor in the space of a heartbeat. Perhaps his most renowned hook move was showcased in the Hot6 Champions Summer 2013 event, where he stunned MiG Blitz who up until that point had appeared to be poised for a simple victory. Both live crowds and those at home went crazy, with the move being talked about for years to come.

For a long time, women were locked out of the Esports realm, but trailblazers like Xiaomeng “VKLiooon” Li made sure they got in on the action. Her greatest moment came in 2019 when she dominated her opponent to become a bona fide Hearthstone Grand Master. This was ultimately a culmination of incredible moves, all of which were being followed by her throngs of followers.