A Russian spy satellite that missed its target crashed into Earth Wednesday morning, turning into a glowing fireball seen by many observers in the United States. Kosmos-2551 caused a series of fires that led many people to the American Meteorite Society (AMS).

Images captured by AMS show a 27-second video of the destruction of the Russian satellite.

While there is no confirmation from Russia, there is no doubt that this ball of fire many have seen is the result of Kosmos-2551 re-entering the atmosphere. The location and timing coincide with the orbit of this Russian spy platform.

At 5:43 a.m. PST, this is the exact time it was estimated to pass this equipment through the area you saw being engulfed in flames.

Kosmos-2551 is a reconnaissance satellite launched by Russia on the 9th of last month, which apparently failed shortly thereafter. The spacecraft has not adjusted its orbit since liftoff, according to astronomer and satellite researcher Jonathan McDowell.

Now it seems certain that the recently launched Russian spy satellite Kosmos-2551 has failed – it has not adjusted its orbit since its launch on September 9 and is expected to return tomorrow. pic.twitter.com/IDOHZstYV6

The cremation of Kosmos-2551 probably did not threaten anyone on Earth. The satellite is “expected to weigh around 500kg and no debris should reach Earth,” he noted in another tweet on Monday. 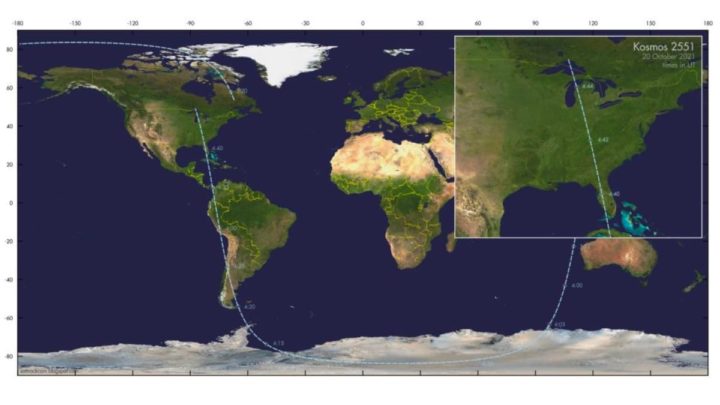 These unwanted space fireballs, while often spectacular, are not particularly uncommon. Last year, in April, for example, the re-entry of a Soyuz rocket caused a wonderful sight in the sky of the Iberian Peninsula.

However, these events are becoming more and more common as humanity launches more and more satellites into orbit. This explosion of satellites worries many experts, who stress that we must act so that the issue of space debris does not deteriorate.