Atmospheric obstruction favors the presence of heat in this region of the world, to the point that temperatures are unusually high. Heat warnings are in effect in the Northwest Territories and Yukon.

Its longevity is remarkable: depending on the sector, we are talking about eight to ten days in the scorching heat. This episode could have become the longest ever observed, particularly in the municipalities of Inuvik (Northwest Territories) and Old Crow (Yukon).

special fact: Windsor, in southern Ontario, will be as warm as Inuvik, near the Arctic Circle.

Mercury above 30°C is even possible in some places: Norman Wells, in the Northwest Territories, is one of them. There is also an impressive anomaly on the radar: temperatures can exceed seasonal standards by about 15°C in some areas. Over the next five days, we’re talking about an average of eight to nine degrees above normal. 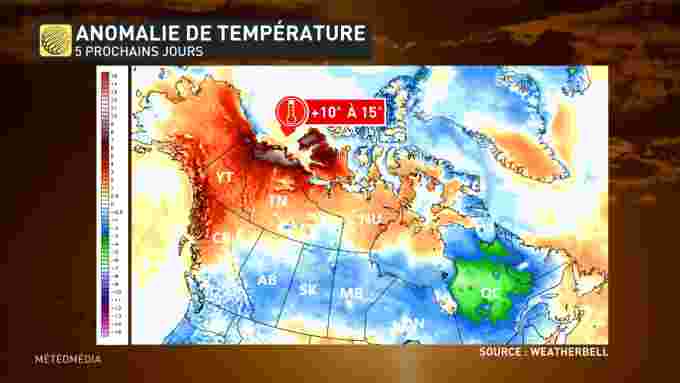 Nighttime temperatures are not expected to dip below 20°C, adding an exceptional layer to the already unusual heat wave. It is already very unusual for the north of the country.

Heat also has a side effect: widespread dryness. Several fires are currently raging in northern Canada, which has resulted in the deployment of many firefighters. Roads had to be closed due to debris, and vision problems were also observed. Abnormally dry conditions are expected to last for a few more days, increasing the risk of fires.

This unusual atmospheric context for visiting should extend until next week, when the hills can migrate eastward. The Canadian Prairies should be next on the list.

See also: Tropical Storm Bonnie will erupt from the Atlantic to the Pacific