Its publisher, tinyBuild, announced that Potion Craft will be launched from early access to join its final version this fall. Thanks to the already good content, the game puts us in charge of a chemical store in a small town, whose potions we sell in a vengeful way. Catering to the different desires of our customers, we have to prepare potions with different effects, and then sell them in order to purchase new ingredients, while gaining the necessary experience to advance in the scenario. 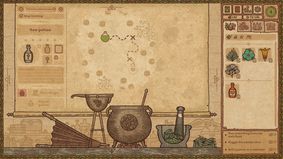 Thanks mainly to its concoction system, it surprises, since each component plots a path on an effects map centered around the starting cauldron, forcing the player to constantly measure between progressing along the drawn path and dodging obstacles in the way of the strongest effects. Progress is long and linear, the Play It’s never really revamped, but we do enjoy trying out new recipes, improving paths, labeling potions and discovering new effects, before incorporating them.

Clever and hugely addictive, its final version will feature a major novelty, the possibility of prolonging its doses with oil as well as water, moving the cursor back towards the boiler. With new missions, a revised reputation system, new potions, and a bargaining system via a mini-game of now definable difficulty, there will be enough to immerse yourself in one of the most comfortable versions of recent years.