The Governor General, The Right Honorable Mary Simon, will serve as Honorary Patron

After two years of online presentations, REEL CANADA is pleased to announce that Canadian Film Daylive and person is back! Canadian Cinema’s ninth annual celebration will take place on April 20, 2022 and will feature over 1,000 events and dozens of films for all tastes that will be available on local streaming platforms and TV stations. In-person performances will take place in 600 communities across Canada and in more than 35 countries around the world.

We have the honor to announce that the Governor General of Canada, The Right Honorable Mary SimonShe is the sponsor of Canadian Film Day 2022. An official welcome from Her Excellency will precede every CCG show this year.

This year’s theme, Celebrating Indigenous Voices, presented in association with the imagineNATIVE Film + Media Arts Festival, features Indigenous cinema created by filmmakers from many nations across Canada. There will also be panel discussions with the participation of several Aboriginal film artists. Over 25 Aboriginal feature films will be shown throughout the day.

Imagine NATIVE CEO, Naomi Johnson (Mohawk), said: “ We are pleased to be able to present the work of several talented Indigenous filmmakers as part of Canadian Film Day at REEL CANADA. We hope to introduce new audiences to these great films. »

REEL CANADA Board Member Jason Ryle (Anishinaabe) said, “First Nations, Métis and Inuit filmmakers across Canada have been making extraordinary films for decades. The growth of Aboriginal films in recent years is truly remarkable and will continue to be Decades to come. It is great to see REEL CANADA and Canadian Film Day celebrate these great films.”

Some of the notable programs across the country include:

If you want to organize a free CCG event in your community, visitcanfilmday.ca/en/register And sign up today.

CCG is made possible by the tremendous efforts of our dedicated sponsors and partners who continue to support us year after year. We are excited to have many of our sponsors at this year’s event again, including Telefilm Canada, Netflix, Encore+, Radio-Canada, Bell Media, Hollywood Suite, Cineplex, Landmark Cinemas, CMPA and many more. The full list can be found at Sponsor page on our website.

REEL CANADA is a charitable organization that celebrates the diversity of Canadian cinema and its ability to spark important conversations about Canadian identity. Through its core programs – Our Films in Our Schools, Welcome to Canada, REEL Opportunities, and Canadian Film Day (CCD) – REEL CANADA has reached millions of students, new Canadians and the general public. 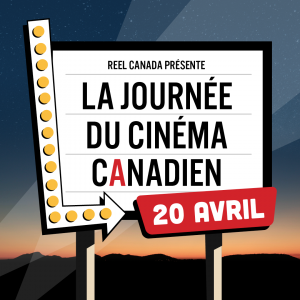