When you think of athletics in Canada, the sport of hockey may come to mind. Of course, other popular winter sports like Curling and Skiing are among those Canadians choose to participate in. While the great white north features sports from all around the world, winter sports tend to be the most popular in the nation. However, the success of one professional sports team has changed the outlook for one summer sport in Canada.

Baseball is known as America’s pastime and is popular in warmer climates, but isn’t the most popular sport in Canada. However, the resurgence of the Toronto Blue Jays has influenced the youth of today signing up to play the sport. Doubters of the sport have deemed it boring, but kids are flocking to the next potential Blue Jay. The era of Jose Bautista, Edwin Encarnacion and Josh Donaldson helped Canadians across the nation fall in love with the sport. Their playoff run ultimately fell short of a World Series title, but the country backed the team and helped create a new generation of baseball players.

2015 and 2016 were glorious for the modern-day Blue Jays. However, Toronto were bounced in the American League Championship Series in consecutive years, failing to reach the World Series. Toronto had championship fever but were unable to scratch the itch. For the Blue Jays, they have predominantly missed the postseason in their history. When the Blue Jays reached the playoffs in 2015, it was the first time Toronto participated in the playoffs since 1993, which just so happens to be the last time Toronto won the World Series. Many consider the current crop of Blue Jays as longshots to win the World Series, but Toronto are certainly not backing down. Betway Sports has Toronto listed at +2200 to win the World Series, which are better odds than the Braves (+3300) and Cincinnati Reds (+5000).

The Blue Jays are fighting for a playoff spot but need to improve their lineup, mainly in the bullpen. With that being said, this crop of Blue Jays will be a team to watch for seasons and their success on the field will directly translate to youth baseball registration across the country. The MLB Draft is a spectacle watched by baseball fans and it’s interesting to see the inflation of Canadians taken in the annual draft. The shortened 2020 MLB Draft saw 5 Canadians selected, which is an achievement considering there were only five total rounds.

Josh Naylor (Mississauga), Zach Pop (Brampton), Cal Quantrill (Port Hope) and Jordan Romano (Markham) are four players from the Greater Toronto Area that have been influenced by Canadian baseball. The aforementioned players were allowed to compete with Canada’s Junior National Team program, which helped the elite prospects be noticed by scouts and international competition. Kids of the sport are being influenced by larger-than-life athletes. In the mid-2010s, it was Bautista, Donaldson and Encarnacion leading the charge, which helped spike registration numbers across the country.

See also  The playoffs begin, and so do the Maple Leafs' problems

If the current group of Blue Jays reach the postseason and do damage (especially when professional baseball returns to Toronto), little leagues across the nation can expect to see increasing numbers once again. Youth baseball is one of the most cost-effective sports to participate in. With the added leadership from the Blue Jays on the field and in the community, success for Toronto’s MLB team means success for youth baseball across the country. Canada has grown into a potential Olympic competitor in baseball and should continue to see success on the international stage. 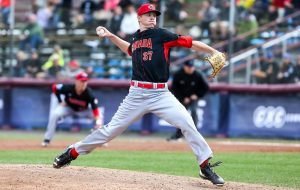 For a sport that struggled with registration numbers in the past to a country that now produces consistent Major League talent, Canadian baseball is in a sweet spot. But with the Blue Jays’ help, Canadian baseball can grow even further – and that’s always a good thing